Some Thoughts on the Novel as an Art Form 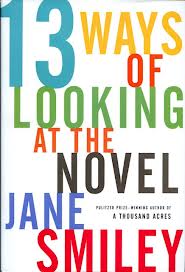 That said… What is a novel? According to novelist Jane Smiley there are “five small facts that apply to every novel. A novel is (1) lengthy, (2) written, (3) prose, (4) narrative with a (5) protagonist.” This is how Smiley defines the novel in her how-to, literary criticism book 13 Ways of Looking at the Novel.  “Every novel has all of these elements,” she writes. “If any of them is missing, the literary form in question is not a novel.”

Smiley continues: “A novel is a hypothesis. A novelist shares with a scientist the wish to observe… But, of course, the novel is a particular type of hypothesis — it is an ontological construct, it is a theory of being.” Here’s another great quote about the novel: “The underlying assertion of almost every novel is that meaning exists and can be understood because it can be arranged in a sequence that then takes on some sort of logic.”

Jane Smiley’s love for this art form pours out of the 500-plus pages in this behemoth. There are more than a few dull pages scattered between the covers, but that’s understandable. The titular 13 Ways are really just 13 chapters, each one focusing on a different aspect of the novel, such as “The Psychology of the Novel” and “Morality and the Novel.” Since the book is so expansive, I’ve chosen a few of Smiley’s claims and arguments to discuss.

When I read an essay or an article in some news outlet, I approach it with a serious sense of skepticism. I hope the author has something worthwhile to say, and I am open to the notion that there is some truth to be gleaned from this writing, but I never assume that a “nonfiction” piece is accurately portraying reality. Nonfiction is not necessarily science. The ultimate goal of a memoir, an essay, and op-ed, is not accuracy. The construction of nonfiction requires collecting certain impressions, memories, ideas and (sometimes) facts and piecing them together in a manner that seems logical. Basically, it’s about making an argument. In this sense, I think nonfiction requires suspending a substantial amount of disbelief. Nonfiction asks the reader to believe what they are reading to be “real,” that the structure of the narrative has some sort of connection to a sequence of actual events. Novels, on the other hand, are works of art. The author of a novel does not make factual, scientifically falsifiable claims. The novelist is telling a story. While discussing Proust, Smiley makes a point that sounds similar to my own: “And, as Proust would have maintained, the construction of memories themselves, and their arrangement into a logical and understandable order, may make them fictional, but also makes them worth reading about.” This is exactly what “nonfiction” does. The only difference is that novels do not demand the pedestal of accuracy, whereas nonfiction writing does.

Very early in this massive book, Smiley makes a strange decision to insert her religious views into the conversation: “I came to believe in God and to accept a defined picture of Reality that took elements of Christianity and combined them with elements of Eastern religions. It was not an institutionalized religion, but it was a defined faith and had a scripture. It was called A Course in Miracles, and it completely changed the way I looked at the world.”  I’ve never heard of this book, and frankly I’m not even interested enough to do an internet search for it. Smiley says that her faith, “maintains that the world, all physical things, all elements of the universe, and all dimensions, including time, are a mental construct, and that the Mind or Source preexists matter and is connected to itself all the time and in every way.”  Her decision to put this in the first ten pages of her book perplexes me. Why would Ms. Smiley make a confession that indicates she lacks basic critical thinking skills and an understanding of science and reason? She talks about her religion with the self-righteous tone you might expect from someone who decides she has found “Reality” by cherry-picking from eastern religions. If Smiley’s goal is to analyze the art of the novel, why does she bother claiming she has found the truth faith?

Getting past this religious diversion, Smiley really picks up the pace and gets to the red meat. She believes in the novel as a source of personal and social liberation. Here she’s speaking my language: “In a society that promotes conformity, novel-reading — one person experiencing both the mind of another person and her own mind experiencing — is a subversive source.” She continues: “The novel always promotes complexity as both an organizational principle and a narrative principle.”

Smiley talks a lot about how reading novels shapes our perception of other people and the world around us. “From our habit of reading, we unconsciously imbibed hundreds of character portrayals, thousands of word usages and sentence structures, thousands of metaphors, similes, and circumlocutions. We saw countless motives analyzed, innumerable behaviors described.” Maybe this is one reason why reading fiction helps a person empathize with others, as described in a great New York Times piece called “The Neuroscience of Your Brain on Fiction.”

Smiley is a champion of the ultimate freedom of the artist to tackle any subject matter: “When the literary culture at large tries to impose an answer by insisting that ‘authenticity’ resides in the sex or the ethnic or national origin or biographical experience of the author, it kills the very thing that makes the literary culture vibrant, which is the sense of freedom, vitality, and power the author feels while he is creating his work.” She’s also hopeful that the novel as an art form will survive changes in the technology of media and art. “My guess is that mere technology will not kill the novel. It is too different from movies and other forms of visual entertainment to be replaced by them.” Smiley offers great advice for writers who are mired in their novel and can’t find a way out: “If [the novel you’re writing] is not good enough, the best way to improve it is to learn more about the subject of your novel.”

The last “chapter” is really a 200-page long discussion on 100 different novels she’s read. Smiley gives a summary of each novel, points out the main characters and explains what it is that makes each novel worthy of attention. It’s a good overview for a guy like me who has never read James Joyce’s Ulysses, William Makepeace Thackeray’s Vanity Fair or Charles Dickens’ A Tale of Two Cities, and — in all likelihood — never will.

She has a lot of great insight into what makes novelists tick. Jane Austen’s novels “pay close attention to the desires of female characters,” which was revolutionary because: “Female virtue in the eighteenth century (and into the Victorian period…) required that young women be entirely ignorant of love and choice until they were solicited.” Here’s Smiley on Harriet Beecher Stowe’s novel: “no one interested in American history, or in the history of the novel, or in the work of women writers should miss Uncle Tom’s Cabin.” Great stuff.

Not all her book reviews are as insightful. For example, Smiley makes a fool of herself by ranking on The Great Gatsby: “I don’t think it is careful enough, wise enough, or well enough thought through to be a masterpiece.” Sorry, Ms. Smiley, I know you won a Pulitzer Prize in fiction, but you’re flat-out wrong here.

I read this book over the course of two weeks while I was taking a break from working on a novel of my own. Smiley’s “ways of looking” at the novel stimulated my mind and made me question some of my own assumptions about the art form. If you’re obsessed with novels like me, or if you’re writing your own, this book will provide you with some interesting perspective. And some parts will piss you off, which is always good.
Posted by Isaac James Baker at 8:19 AM

Hello! Thanks so much for stopping by. My name is Isaac James Baker, and I’ve worked as a freelance writer, editor, newspaper reporter, and all sorts of random word-related jobs. I studied journalism at LIU-Brooklyn and received a master’s in writing from Johns Hopkins University. I’ve worked the wine bar, the harvest, the crush, and studied wine with the Court of Master Sommeliers and the Wine and Spirit Education Trust. When I’m not tasting wine or writing, I’m probably reading books or chasing surf around East Coast beach breaks. I contribute to the award-winning daily wine blog Terroirist and publish frequently with a handful of outlets. This blog is a home for my musings on wine, books, writing, etc. I hope you enjoy. Cheers! 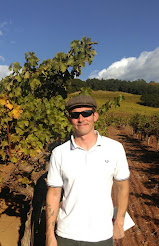 Are you on GoodReads.com? Connect with me @ https://www.goodreads.com/isaacjamesbaker

Enter your email address to subscribe to new blog posts

My Tasting Notes and Wine Ratings

Looking for a good wine? Click here to view thousands of my tasting notes and wine ratings.

Your Wine Here (or Book)

Winemakers and distributors: Would you like me to review your wine?

Authors and agents: Would you like me to review your book?

For information on how to send samples, email me at isaacjamesbaker@yahoo.com with “Review” in the subject line.